The Taste Of The Western Wasabe ( Mini's range Carnival )

Hi everyone.We all know the fact that most people are crazy about Mini Cooper sport mini because of  it's eyes catching design as well as the performance for those who want less with more.
Mini cooper has been listed one of the most charisma , the most important car in the automobile history .It was design by the Sir.Alec Issigonis in the early 60s.
This Mini car has been the "spot light" in many movies such as the italian job in 1969 as well as in 2003 , Bourne supremacy and Mr. Bean Oh course!
The recent event that i took part was the important publicity campaign to showcase the 2011 Mini Cooper , S version and also  Countryman.
Is was held at the MINI showroom which next to the BMW head quater in Glenmarie , Shah Alam.There were about 8 participants ( Including myself ) with 4 instructors and the journey start from here to Putrajaya , MARDI center and come back.
After arrived at MARDI then we were instructed to drive to the open car park .... and then we did some handling stuff but what arouse me is when the instructor perform 180 degree reverse turn and some tyres burning scene .It was just awesome.
I was driving a Mini Cooper S from the start & with Mini Cooper on the way back.I was addicted to the shear power of the "S" version which more fun to drive compare with the standard version.
My top speed on the highway was closed to 200 km/h with "S" version and thankyou so much for the turbo charger that generates more power & torque to the engine. So , my advise is focus on the "S" version for those who want great performance.


Please  kindly contact the sweet & charming Cik.Shezlin Eleda
at 017-3473477 or by email to shezlin.eleda@autobavaria.com.my . 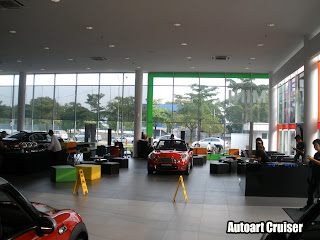 Hi Kin,
The Mini is indeed one iconic car. I'd be happy to go on a convoy on these new Mini :-) make mine a green one like Mr. Bean!
Cheers!
Erwin

Yeah!I love the Mini also especially the John Cooper Work version comes with 6 speed manual transmission ,210bhp Max torque abt 260Nm.But the price OTR is RM295K.
The S version is really fantatic & surprisingly powerfull and is fun to drive & the price is RM239,888.00 N even the normal Mini is RM195,888.00.
But is serious price tax for such small car but is because of the branding.
Is nice to keep but when i save enough wealth 1st then i will think about it.

Kin
Kuala Lumpur, Malaysia
Hi everyone, I am a huge fan of cars.I do collect varies size of diecast models way from 1:87 to 1:18 scale. I also enjoy test drive all type of cars especially high performance sport car. I have this dream to become a test drive editor one day. Anyway , welcome to my blog and i'm sure you all gonna like it. Thanks. Kin.

Friends's favourite Topic About My Work

Friends Who Passionate About My Work